Insulting the Holy Prophet (PBUH): Kuwait will send the protesting expatriates back to the country 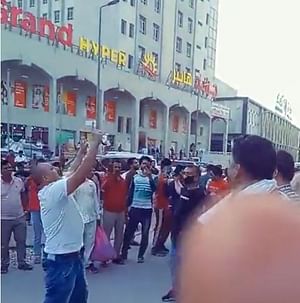 Kuwait has ordered the arrest of expatriates who took part in a protest against the insult to the Prophet Muhammad (PBUH) in India. Then they will be sent back to their own country. The protests took place in the Fahil area of ​​Kuwait on Friday after Friday prayers. A report in the Kuwait-based Arab Times quoted several sources as saying. Under Kuwaiti law, expatriates cannot take part in any kind of protest. As such, the expatriates who took part in Friday’s protest violated the law.
Kuwaiti media outlet Al Rai reports that the process of arresting the protesting expatriates has already begun. Arrangements are also being made to repatriate them after their arrest. Even those expatriates will never be able to return to Kuwait.

Several countries in the Islamic world, including West Asia, have issued protest statements. Several countries have also summoned the Indian ambassador after he made derogatory remarks about the Prophet Muhammad.

It was not immediately clear if there were any Bangladeshi expatriates among the protesters.

Recently, two top leaders, including BJP spokesperson Nupur Sharma, made derogatory remarks about the Holy Prophet (PBUH). Protests are taking place in different countries of the world including India.